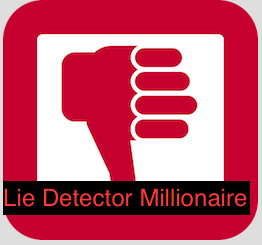 Is Lie Detector Millionaire A Scam?

What is Lie Detector Millionaire?

A Good question!! The other day I received an email, which was not classed as Junk by the way, inviting me to watch a video. Nothing new there then!

The “blurb” accompanying the email explained that the author was “sick and tired” of the internet gurus who promised the earth and provided
nothing but disappointment and loss of investments!   He assured the reader that he wanted to make amends for having scammed people himself in the past by offering a way to earn considerable amounts of money for no outlay!!

He stated that he had actually taken a lie detector test which affirmed that he was telling the truth about this “opportunity” and he claimed that he had made huge amounts of money with it during the past year!

He went on to say that he was sick of videos with actors pretending to
be millionaires, and showing their fake “millionaire” lifestyles with huge mansions and prestigious cars.

How would the money be earned?

This method is based on a Forex robot software system which it claims can run trades on Binary Options many times a day, and allegedly there
has not been a losing trade made by it in the last eighteen months! It is supposed to work with the help of Trader X who is evidently the broker involved, but of course chooses to be anonymous!

Thus it should be possible to earn large sums of money every day!

My “Scam antennae” rose up!!

I know that there has been a number of Forex trading scams recently, and it began to be apparent that this was just one more,

This guy, whose name is Daniel Wilkins, was doing exactly what he professed to dislike most of all!

So Who Is Daniel Wilkins?

Of course, I immediately looked online for reviews of the Lie Detector Millionaire System!

That really is basic common sense! It is vitally important to thoroughly check out any business which you are even just considering joining!

But do be very careful when doing a Google search that you don’t just look at the top search results!

I found that the top three results were all sites which stated definitely that this was a genuine opportunity, and definitely not a scam!! These scammers are very clever, and they make sure that there are good reviews at the top of Google searches!

However, when I looked further down the results it began to get interesting! It appears that Daniel Wilkins has no online presence at all. He does not appear on any social media sites, which is unthinkable if he were actually the millionaire that he claims to be.

In fact, he does not exist at all, and is a very convincing actor, as is his so-called partner Jonas Kane, who similarly does not exist!

And as for the lie detector test, all you actually see is the actor playing Daniel Wilkins with wires attached to him, and part of a person masquerading as a lie detector operator who asks a few questions.

The questioner then later on reveals the “results” of the test. He gets away with this because although almost everyone has heard about lie detectors, very few people know anything about them!

I’m sorry to say that the whole thing does sound at least plausible; probably enough to convince anyone who really wanted to be convinced to at least give Lie Detector Millionaire a try!

I must confess that I did put in my email and phone number, and almost immediately I got a number of phone calls from numbers all over the place that I did not recognise.

I did not answer any of them!

From my research, I had found out that this is exactly what happens when people sign up – they are bombarded with phone calls asking them to open accounts with the broker who then asks for increasing amounts of money.

I also found comments from distraught people who said that they had lost all the money they had invested and had not so far managed to get any of it back, despite the “guarantee” that was made to them.

If It Sounds Too Good To Be True…..

Then it probably is!

In fact, in my opinion there is no doubt at all that Lie Detector Millionaire is a BIG FAT

Of course, that is just my opinion, and you must make up your own mind, but I would be very interested to hear from anyone who knows differently.

The plain truth is that there just is no way that anyone can make vast sums of money online in a very short time. It takes work and persistence, and you need to know exactly how to go about it. Be very wary of anyone who tells you otherwise.

If you would really like to find out how to go about making legitimate money online, here is my Number 1 Recommendation:

At Wealthy Affiliate you will get the very best possible training to learn the right way to build an online business, and get all the help you need, in a totally scam-free environment.

So join me there for free, and I will contact you almost immediately to show you the way around and help you to get started on a really amazing journey to your new online business! I am really looking forward to meeting you there.

If you have any questions or comments, please leave them in the box below, and I will get back to you as soon as I possibly can.

Many thanks for taking the time to read this.

Today I received an email telling me that my “position” as a beta tester for Lie Detector Millionaire would be given to someone else if I did not action it within 24 hours! No chance of that of course!

8 thoughts on “Is Lie Detector Millionaire a Scam?”